It's People Who Care 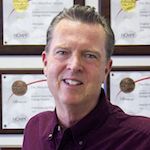 I could easily write a book about my many experiences with, and love for, NCMPR. Boiling that into a short essay is no easy task. Let me focus on what is most important -- the people. Above and beyond everything that NCMPR does as an organization, and there is much it does, it comes down to people. The contacts, the friendships one makes as a member of this organization, last long after the conferences are closed and people have returned to their desks. They last a lifetime. I served as NCMPR President for the 2001-02 year. As such I had the wonderful opportunity to attend all seven district conferences as well as the ACCT national conference and the AACC Commission meetings in Washington, D.C. I hit the road the last week in September and was seldom home until the last meetings were done during the first week in November. My wife and daughter wondered who this strange man was coming into their home when I returned. If you haven’t already grasped the significance of those dates, my first trip, to Kansas City, was less than two weeks after terrorists flew planes into the World Trade Center and the Pentagon, and crashed into a Pennsylvania field on Sept. 11, 2001. To say the world changed on that day is truly an understatement. Over a six-week period I crisscrossed the nation visiting a dozen or so cities from coast to coast, north to south. The airports were making up the rules as we went, from still fairly relaxed to those checking every bag and using dogs to sniff for bombs. I received many questions during my travels, but the one question I heard the most was, what do the people in other parts of the country think about what has happened, how are they reacting? How do the people in Dallas, in East Lansing, in Portland, in Richmond, in Utah, in San Diego or any of the other places I had visited feel about what has happened? And what I learned during that experience is that, despite our many cultural, political and social differences, we are all the same. Underneath it all, when you scrape away those differences, we all care about each other. Throughout this great country of ours, from shining sea to shining sea, people care. And that’s what NCMPR is to me. It’s people who care.

One Stop for Docs

Search our Conference Library for documents from national and district conferences.